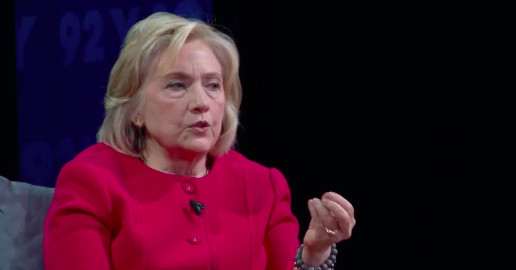 Hillary Clinton took some fairly strong shots at Facebook and its chief executives on Friday, telling Recode that social giants like Facebook would “have to be held accountable” with regulation after the 2016 election.

The former Democratic presidential candidate was disadvantaged by the influence campaign plotted by the Russians that played out on Facebook, and Clinton said she felt Facebook was overwhelmed by it. Clinton’s comments were notable in part because she weighed in on some of the executives who are responsible, such as Sheryl Sandberg, who is a close friend of hers.

“I think that the companies themselves are going to have to be held accountable,” Clinton told interviewer Kara Swisher during a live taping of Recode Decode at New York City’s 92nd Street YMCA on Friday evening, ticking through some efforts to further regulate companies like Facebook. “They would have to recognize that’s what’s happening now is far beyond anything Mark Zuckerberg thought about in his dorm at Harvard.”

“When you have the military of Myanmar using Facebook to stoke genocide against the Rohingya, that is not something that is going to bring together and create community — just the opposite.”

Clinton said that adversaries of the U.S. “just exploited the heck out of Facebook.”

Clinton obviously has a complaint to make: Facebook was slow to recognize the attempts to wage disinformation campaigns during the 2016 campaign, and the platform still continues to reckon with new attacks waged by new nations in the run-up to the 2018 midterms. Opinions vary on how much of a difference the Facebook ads by Russian-backed hackers made on the outcome of the 2016 race.

Swisher asked Clinton if she had spoken with Facebook CEO Mark Zuckerberg or Sandberg directly since the election — a question Clinton didn’t answer. But any frustration with Sandberg would be a little awkward, given that Sandberg endorsed Clinton and is a longtime personal friend.

“I think they knew more during than the election than they admitted, but I think they didn’t understand the full implication of it,” Clinton said when asked about Facebook’s top two leaders.

In fact, Clinton took a shot at Zuckerberg right off the bat.

A Suspected Killer’s Fans Are Still Promoting Him Online
Crypto and the US Government Are Headed for a Decisive Showdown
TikTok Is ‘Shadow-Promoting’ Banned Content in Russia
Smiling Dogs? Horses Made of Clouds? Captcha Has Gone Too Far
Machine Learning Is Causing a ‘Reproducibility Crisis’ in Science