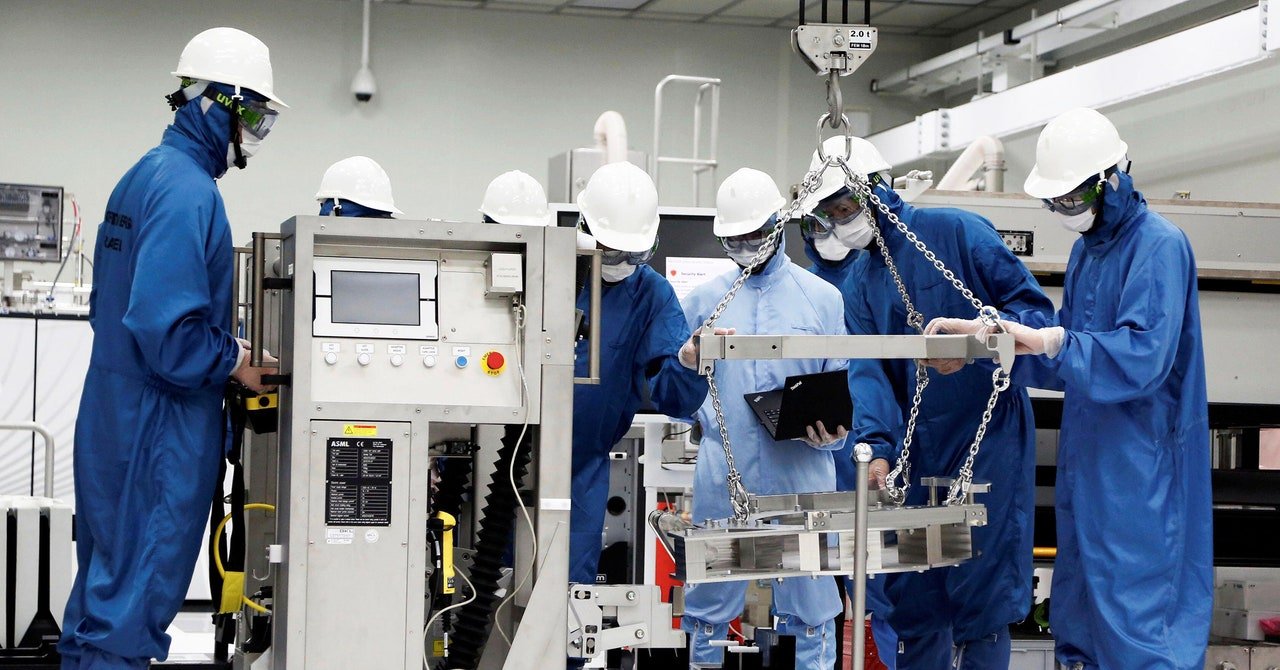 Plenty of places claim they are Europe’s answer to Silicon Valley: Stockholm boasts the most unicorns per capita, and London is the continent’s VC hub. But only the small Dutch town of Veldhoven—whose population numbers 45,000—is home to the closest thing Europe has to a big tech giant.

From its unassuming base near the Belgian border, ASML, a company that builds the machines that make semiconductor chips, has mushroomed to become a critical cog in the global technology industry. At the end of 2021, it was named Europe’s largest public tech company by market cap, boosted by the pandemic demand for devices and the global chip shortage. Spun out from Dutch electronics giant Philips in 1984, ASML enables other companies to make semiconductor chips—the technological brains in phones, cars, computers, and smart homes. Experts describe ASML as a bottleneck: The company claims it has between 80 and 85 percent share of the total market for lithography systems that make semiconductors. When it comes to the most advanced type of chipmaking lithography machine, known as extreme ultraviolet lithography (EUV), that market share surges to 100 percent.

But despite ASML’s recent momentum, there is one area of uncertainty on the horizon. As a result of trade tensions between Washington and Beijing, the company has been blocked from selling its most advanced machines to China. Although the country currently only sells 7.6 percent of the world’s chips, according to the Semiconductor Industry Association, this number is growing fast and chips are one of seven technologies Beijing has targeted for development. Attempts to block China from the global supply chain has created concern that the country will rush to develop its own version of ASML, threatening the Dutch company’s outsized influence over the semiconductor market.

Thanks to the gamble ASML took in the 1990s to pursue the development of EUV technology, which uses tiny rays of light to carve patterns on the silicon pieces that form semiconductor chips, the company’s dominance in this area is currently unchallenged. ASML estimates its most advanced technology is so complex, it would take at least 15 years for others to replicate.

“Several of the companies that were competitive [in the 1990s] decided not to take the risk investing in EUV because it seemed like it would be so difficult, so expensive and possibly never work,” says Chris Miller, assistant professor of international history at Tufts University, who is writing a book on the geopolitical history of the computer chip. As a result of that bet, ASML’s valuation has swollen to over $300 billion and its share price has more than doubled since the start of 2020. Speculation is mounting that it could become Europe’s first company to be valued above $1 trillion.

The shift to EUV was long and expensive. The company had to persuade its customers — including Intel, Samsung and the Taiwan Semiconductor Manufacturing Company—to buy stakes in the company so there was enough money to fund the research. By the time it was able to launch its first commercial EUV machines in 2017, the process had cost $9 billion. But the payoff was huge. It is now the only company able to supply EUV machines, which make the most advanced type of chips found in newer phones and games consoles, to industry giants like TSMC or Intel. As of September 2021, the company had sold 125 EUV machines. That might not sound like much, but there aren’t a lot of companies that are capable of manufacturing the most advanced type of chips using these machines and ASML sells them for more than $100 million each.